When I put together a talk, I generally use a central metaphor. When @jennydoesthings writes a talk, she generally uses pictures of her cates. For our talk “The Deal: Quality and Development Together”, we chose BOTH. We decided on using a chess knight and bishop (two pieces that are very different but work well together) to represent QA and dev.

Jenny and her cats, Dax and Dante had a photo shoot with chess pieces. My daughter and I decided to make a photo project of it. So here I present to you Adrian and Hero Dunston’s phototography project: “Knight and Bishop”

@jennydoesthings and I presented “The Deal: Quality and Development Together” at Agile Testing Days USA in Chicago. The conference was wonderful. The people were knowledgable, kind, and a lot of fun! Our presentation was very well received, and we had a great time giving it. We had chess pieces, cats, and even the murder photo!

Heading to Chicago to speak at Agile Testing Days USA, @jennydoesthings and I were lined up to board a plane. We got an announcement that our plane had struck a bird, and we’d need a new plane. With a couple of hours’ wait, I made a game to commemorate the occasion. 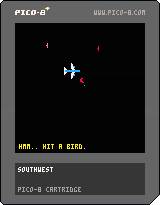 Soon-to-be 11yo daughter wants to do a role playing game for her birthday party. One of her friends doesn’t play a role playing games. There’s a cooperative storytelling game called Fiasco. I made up a little cartoon setting for it. Today I played cartoon fiasco with daughter and soon-to-be 14yo son. I was worried that they would not understand it, or be bored or be upset. It’s mostly a game about terrible things happening to cartoon characters, and while that’s hilarious in cartoons, I could see it being less funny when it’s “your” character.

In our story, the climax was a brawl between an Minion-styled race-car, its Monster truck ex-girlfriend, an evil genius motorcycle bent on revenge, and a thieving anime vampire desperate to pay off the race-car’s medical bills.

They loved it! Really knocked it out of the park with this experience. So pleased.

The game is available for purchase here and you can download my playset here.

Two great pieces of news this week! First, I got word that my TestBash talk in November made their top ten list for the year!

Second, I was informed that Jenny Bramble and I have been accepted to give a talk at Agile Testing Days in Chicago in June!

I feel honored and excited about both things.